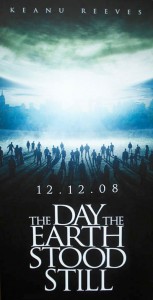 I had been told that this movie was terrible and not worth watching. I never believe the critics so I decided to give it a go and see what this movie was all about. A remake of the 1951 classic sci-fi film about an alien visitor and his giant robot counterpart who visit Earth with a premise of the movie much like Independence Day with an alien race coming to Earth intent on destroying us all. The major difference here is that in this story the alien race are ultimately omnipotent beings that are intent on saving the earth from its ultimate destruction by the human race.

There are many plays on the mentality of military in this movie which I really like in a movie. For example when the alien being (Keanu Reeves) first appears someone in the military squeezes of a round. Welcome to Earth “BLAM” oops sorry my bad. This intro really tells the audience that something sinister is going to happen. It also really instills the wrong mentality of the military thought process. The US military in this movie yet again have the belief that there is nothing in the universe more powerful than them. A mentality that is proven wrong ever so quickly in this movie.

The rest of the movie is the story of one woman played by Jennifer Connelly and her son who obviously has far too much faith in the military (his father was killed at war) trying to save the world by convincing Klaatu (Reeves) that the human race deserves to live. Klaatu is judge and jury on teh human race and in good old Reeves style is completely emotionless through the entire movie.

The end of the movie is as you would expect from Hollywood, Connelly saves the world by convincing Klaatu that the human race can change and that they are worth saving. The aliens stop all mechanical and electrical devices in the world form functioning allowing the entire human race to hear the beauty of the earth around them.

I found this movie to be very interesting and fun to watch, the special effects are fantastic and the story is one that portrays a  ‘stop and smell the roses’ mentality. However like so often in Hollywood productions there was little thought put into plot flaws and integral scenes from the movie. The alien race that was bent on destroying the entire human race had a change of heart and decided to spare us all. The monumental movie flaw here almost wrecked the whole movie for me. When the aliens stopped ALL mechanical and Electrical devices from functioning did any one in the writing, editing, directing team think about all the people in the world on life support systems in hospitals, people that are currently in surgeries, pacemakers and finally AIR TRAVEL. Come on people how did this get past you all before releasing this movie. It would have been so simple to correct this before hand with a few well placed shots of governments  around the world clearing all the skies of aircraft once the intent of the alien race was discovered. At the end when all the devices in the world ceased to function a couple of shots of people in hospital waking up after the life support systems ceased to function. This could have even been introduced into the plot line s for the movie, maybe having one of the characters end up in hospital on life support. There was so much more potential for this film than was realized in it’s final release. Like usual though it was so focused on the US and not the rest of the world, as if the US was the only important country on the planet. Even Independence Day included other countries albeit quickly.

My rating on this movie is:

6/10 – Tonnes of potential to be one of the great movies of the year but tainted with a lack of real thought and a USA dominant theme.
Its a shame there are so many movies with great potential that are killed by poor writing/directing and thought.